Bench marks are the visible remains of height measurements made by the Ordnance Survey. When used in conjunction with older Ordnance Survey maps they indicate the height above sea level at the point of the bench mark. The maps show a bench mark symbol, the letters BM (or B.M.) and the measured height above sea level. All heights are measured relative to Newlyn in Cornwall.

The measurements were made and carried around the country by a network of around 190 fundamental bench marks (FBMs). From these FBMs tens of thousands of lower-order bench marks were established. There are a small number of standard designs:

The network has had little maintenance since the early 1980s when satellite technology took over. Many bench marks are now “lost” due to building work, demolition and the widening of roads.

Between 1915 and 1921 very accurate measurements of tide heights were made at Newlyn in Cornwall. From these measurements an average, or mean, tide height was calculated and this is “sea level”. All heights are measured relative to the mean tide level at Newlyn. The 1840 levelling was carried out using a reference point at St John’s Church in Liverpool for “sea level“. From 1844 this was changed and “sea level” was measured relative to a tidal pole at Victoria Dock in Liverpool. There were other measuring points, but Liverpool and Newlyn are the main two as far as Great Britain is concerned.

When we say “above sea level” what we are saying is above the calculated mean tide level, or Ordnance Datum, at Newlyn, or N. This is abbreviated to ODN – Ordnance Datum Newlyn.

Unlike other types of bench marks, the fundamental bench mark (FBM) is still in use and are maintained by the Ordnance Survey. There are 180 FBMs and they provide the basic levelling framework across the country. They are located about 40 km apart along lines of levelling. There is a brass bolt at the top of a small concrete pillar which is used for everyday purposes. There are two further reference points (a gunmetal bolt and a flint in a hurried chamber) which are used for principal levelling. 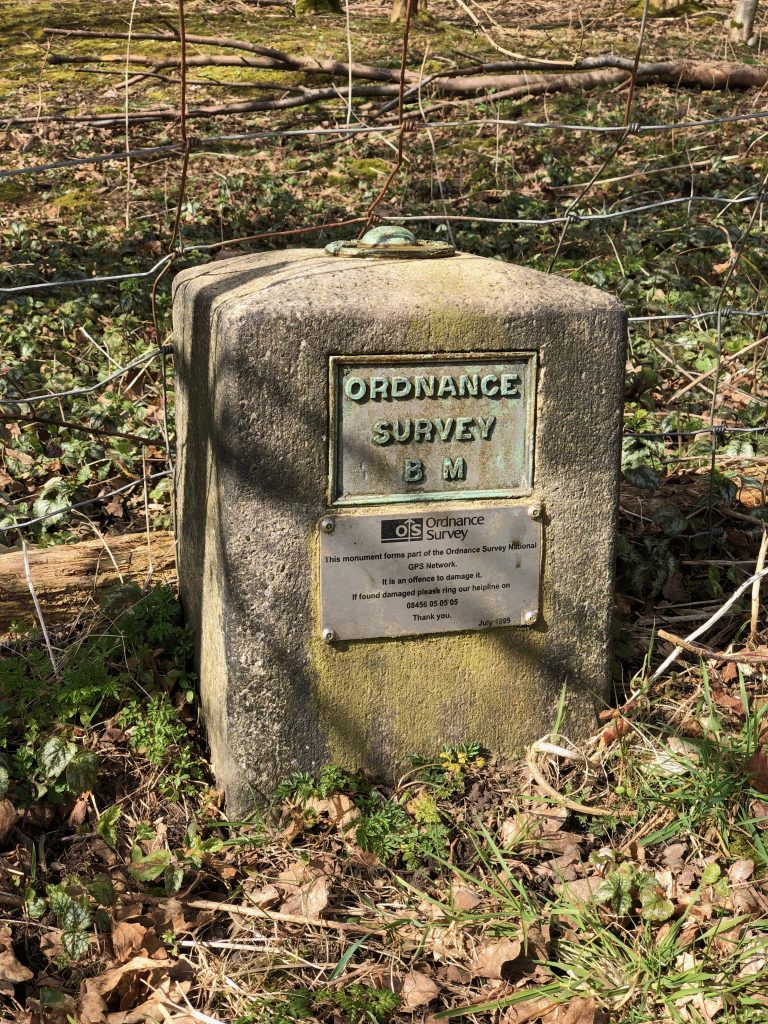 The Ordnance Survey Fundamental Bench Mark at Hoghton in Lancashire.

The next most common type of bench mark is the flush bracket. These are common on Ordnance Survey trig points, bridges and church buildings. It is a metal plate about 9cm wide and 17.5cm tall. They are spaced about 1½km apart along all levelling lines and also at important junctions of secondary levelling lines. Each bracket carries a unique reference number. The height is measured at the top of the arrow on the face via a small metal platform that attaches using the two slots at the top.

Flush brackets are spaced about 1½ km apart along lines of levelling. 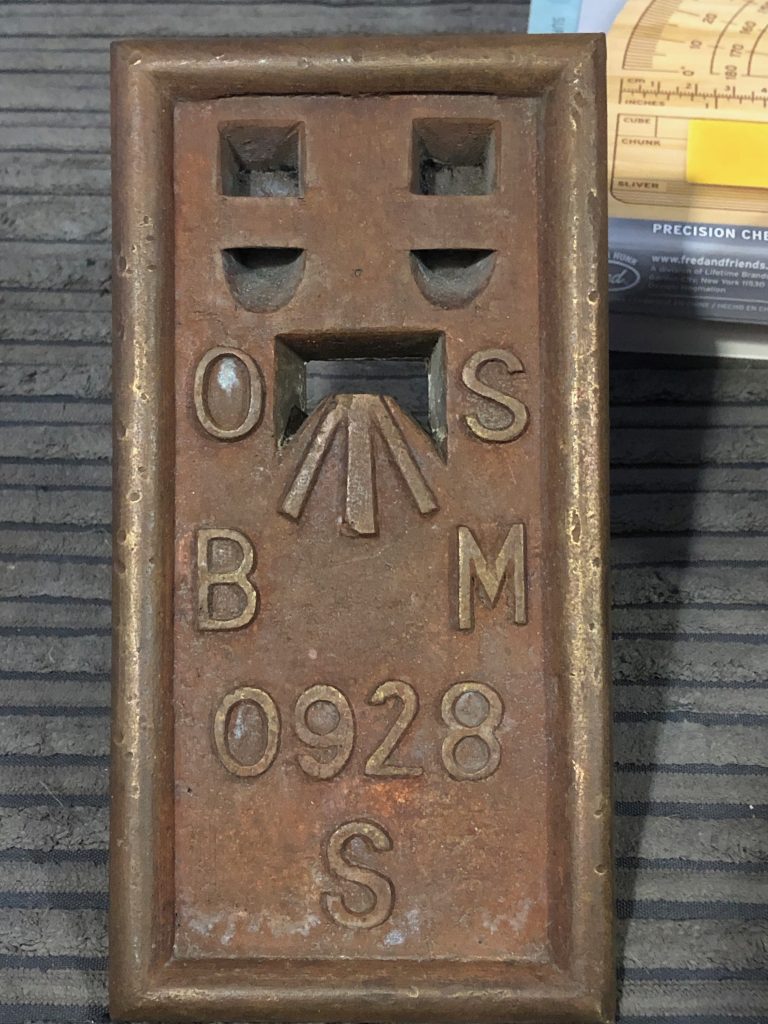 These are not very common. Like a flush bracket, the are mounted on vertical surfaces and consist of a small metal plate with the letters O S B M and a small arrow cast into it. A bracket projects from the base of the metal plate. There are about 260 of these known to have been used and only 33 have survived. 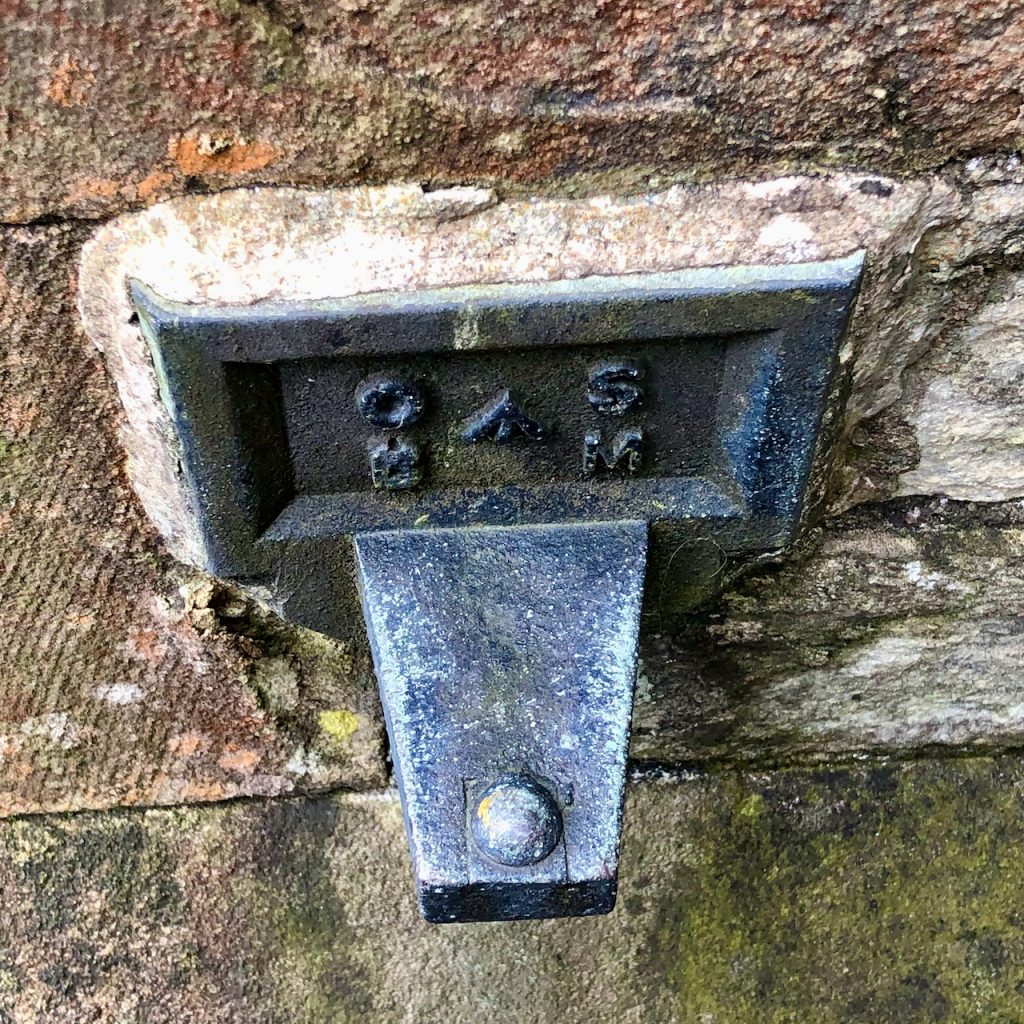 Bolt bench marks are mushroom-headed brass bolts engraved with the letters ‘OSBM’ and an arrow. They are normally found in horizontal surfaces like steps, foundations or concrete blocks. The bolt has a 60mm diameter. 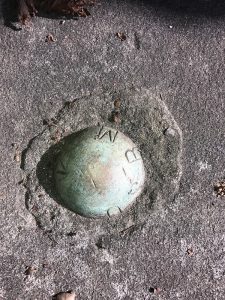 The cut mark is ubiquitous and can be found on houses, walls, stones, churches … even boulders. They consist of a cut bar with an arrow below. There are some cut marks where the arrow is above the bar (I have no idea why). The height is measured at the horizontal bar and they are always on vertical surfaces. 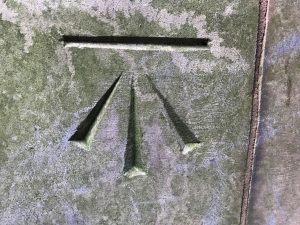 The bolt bench mark are similar to a cut mark and appear on vertical surfaces. The cut mark is accompanied by a small metal bolt. The bolt can be incorporated into the bar or to one side. 1 GL bench marks are frequently measured relative to other datum points.

Rivet and Pivot bench marks are similar to each other. Found on both vertical and horizontal surfaces they comprise a cut mark and either a brass bolt (or rivet) or a small hollow (a pivot). The pivot or bolt is normally on a horizontal surface.

Bench Marks I have Found

You can see a list of the bench marks I have found here on the bench-marks.org.uk site.

You can also see the bench marks I have found on a Google map tile. I update this monthly.

Where Can You Find Bench Marks

The Ordnance Survey still has a database listing the grid reference and a description of bench marks. You can access it from their web site.